Articles and papers written by some of the industries top thought-leaders on business strategy and transformation.

It’s been a breakdown of epic proportions, and it all started with toilet paper. In March of 2020, the global supply chain was brought to its knees by Covid-19, and today, 20 months later, we’re still seeing massive disruptions in the form of empty supermarket shelves, higher priced goods and clogged shipping ports, just to name a few. While we’re still weathering the storm, it’s important to understand how we got here so that we might avoid similar scenarios in the future.

When we talk about the supply chain, we’re talking about the link between resources, processes and businesses that are part of the manufacturing, marketing and distribution of a product from start to finish. If any link in the chain is broken, then the whole system falls like a house of cards. The world had seen virus-related supply chain crises before during the SARS, Ebola and Swine Flu outbreaks, but none of these even came close to the scale of devastation wrought by Covid-19.

For decades, globalization has caused much of the supply chain to be outsourced to a few big players such as China, South Korea and Taiwan. For a striking example of this market concentration, Taiwan Semiconductor Manufacturing Company (TSMC) accounted for 54% of the total semiconductor manufacturing revenue globally in 2020. Almost all of the large electronics vendors such as Apple, Huawei and Qualcomm rely on TSMC to manufacture chips for their latest generations of smartphones, laptops and other consumer products.

In the pre-Covid era, this system of outsourcing and globalization worked well. Companies were able to save big on manufacturing and labor costs and optimize their individual supply chains so that they didn’t need to have capital wrapped up in inventory. Shipping containers from China were cheap and shipping times were fast. The profitability that companies saw from this arrangement seemed to grow and grow with no ceiling in sight.

Then Covid-19 struck. In an instant, all the vulnerabilities inherent in this type of global supply chain were exposed, and the resulting supply chain crisis we are experiencing now is likely to change the way companies operate well into the future.

Many of these concentrated manufacturing hubs in Asia were hit hard in the initial wave of the pandemic. People were sick or quarantined, factories closed and production stopped. Companies down the supply chain canceled orders anticipating a catastrophic dip in sales. Workers across the board were furloughed or laid off in an effort to mitigate the loss of revenue. All of these drastic measures seemed logical at the time, but in hindsight, they have proven to have disastrous consequences.

While consumption did dip for a hot minute, it came roaring back before anyone could have imagined. And because people weren’t able to spend their money on travel, entertainment or dining, they had a surplus of money to spend on consumer goods. People who were stuck at home began to shop online – a lot. According to a New York Times report, Amazon experienced an almost 200% rise in profits with sales of $96.1 billion reported in the 3rd quarter of 2020.

Another example of unexpected consumer demand was seen in the automotive industry. Even though workers were not commuting to the office in the same numbers, people became increasingly concerned for their safety on public transportation. People who rode the subway or took advantage of ride shares decided that they wanted to have their own automobiles in order to lower their exposure to the coronavirus.

Because so many automotive companies had canceled orders for microchips, chip manufacturers began to shift production to consumer electronics, a segment that had exploded in growth due to the number of people who began working from home and the companies that had to make technological advancements on the fly to accommodate those workers. All of a sudden, it was impossible to get a new car and the price of used cars climbed higher.

It was in this rush of consumerism that cracks in the supply chain started to show and shortages began to grow. In addition to these initial product shortages, the next phase of the supply chain disruption would prove to be cataclysmic to shipping, transportation and logistics. 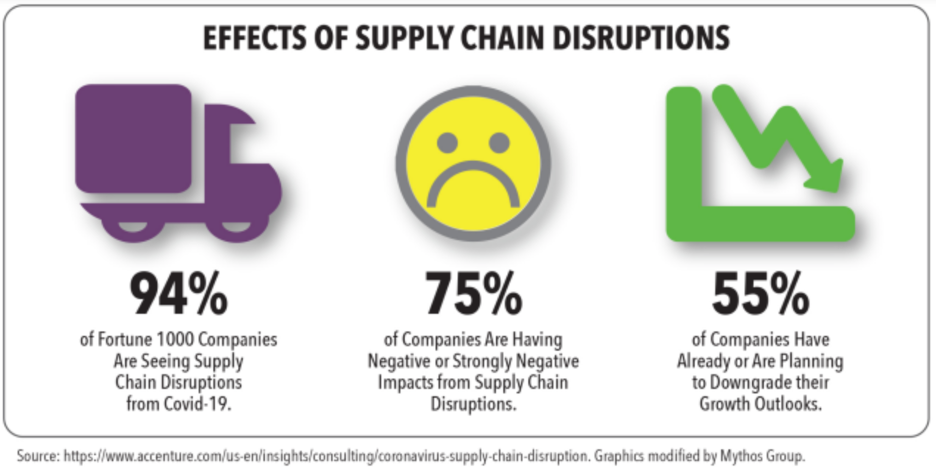 Most goods are transported from manufacturing hubs by large shipping containers via cargo ships. The majority of this traffic is concentrated to and from high-traffic ports. However, when countries were desperate for medical supplies, shipping containers were sent to ports that didn’t have as much traffic. As consumer demand began to grow, a significant number of shipping containers sat empty in these disparate ports.

When the ships that were loaded with available containers embarked for high-traffic ports, namely the ports of Long Beach and Los Angeles, they hit massive bottlenecks. Due to the reductions in the workforce, not enough workers were on hand to unload the increased volume of containers. Once containers were offloaded, a lack of warehouse space meant less room to store them. On top of those challenges, an early wave of retirements and resignations caused a dearth of truck drivers who were desperately needed to transport the containers to their final destinations.

According to an Insider report in October, there were almost half a million shipping containers on 90 container ships waiting in and around the ports of Southern California.3 On October 13th, President Biden mandated that the Port of Los Angeles would start operating around the clock just like the Port of Long Beach which had already chosen to do so.

With so many ships stuck at ports, the containers transported by those ships have become almost impossible to find. If a company is lucky enough to find one, the costs can be prohibitive. Before the pandemic, it was possible to find a container from Shanghai to Los Angeles for around $2,000. By early 2021, that same shipping container cost up to $25,000.

Much of this increase has been passed on to consumers. The U.S. Bureau of Labor Statistics reported in October that the annual inflation rate in the U.S. rose to 6.2% for all items over the last 12 months. This is the largest increase since the 12-month period ending in November 1990.5 If you’re lucky enough to get the consumer items you want or the gasoline that you need, you’re going to pay much more for it than you did last year.

Getting Better and Going Forward

Even though this is just a tiny snapshot of the endless intricacies of the global supply chain, it’s easy to see that the current model is not sustainable. While the global pandemic was an unprecedented disruption, it’s likely to be repeated at some point in the future, and to make sure that our supply chains are able to withstand similar pressures, we must make some changes now in the way we source materials, manufacture goods and transport finished products.

In the business zeitgeist, there’s a generally accepted sentiment that to safeguard against future breakdowns, all industries need to make supply chains local again. In an article for Forbes, Willem Sunblad cites the book, Growth: From Microorganisms to Megacities. In this book, Vaclav Smil calculates that every $1 generated by a manufacturer creates $1.37 in revenue for other service businesses. That’s compared to only 60 cents of revenue generated by every dollar of service revenue.

The argument against bringing manufacturing back stateside is always one of cost and competitiveness. However, Sunblad goes on to suggest that if we focus efforts on high-precision and high-quality manufacturing, then the costs can remain low. He’s not alone in that suggestion. It is also widely believed that broadly adopting technological advancements is another key step in shoring up supply chains and reshoring manufacturing.

Technologies like 5G, artificial intelligence (AI), big data analytics (BDA), blockchain, cloud and edge computing, robotics and the industrial internet of things (IIoT) can enable organizations to redesign their supply chains in an efficient, resilient and cost-effective way. We’ve already seen many companies adopt 3-D printing and automation with positive results. The digitalization of manufacturing and the emergence of more smart factories will increasingly be seen as not only a wise investment, but also as a necessity.

The Covid-19 pandemic has created an extraordinary humanitarian and economic crisis. It has revealed the significant vulnerabilities of an interconnected and interdependent global value chain that drives economies around the world, and it will leave its mark on global manufacturing for years to come.

For a deeper dive into the intricacies of supply chains, value chains and the global value chain, please download my white paper, Reimagining the Global Value Chain. In it, you’ll find insights on how organizations can safeguard production in a sustainable and resilient way so that they can withstand any future pandemics or economic uncertainties.