Articles and papers written by some of the industries top thought-leaders on business strategy and transformation.

No doubt you’ve heard the laments. People don’t want to work. Employers can’t fill jobs. Businesses are closing early because they’re short-staffed. Even if you haven’t heard the grumbling firsthand, you’ve likely seen headlines like, “Staff Quit” Sign Posted on Family Dollar Store as Employees Walk Out. Or, you might have noticed the “Help Wanted” posters that seem to be everywhere.

Yes, there is indeed a labor shortage. In September of 2021, the Bureau of Labor Statistics reported that there were 0.7 unemployed persons per job opening, seasonally adjusted. While that is a shortage of workers by definition, it’s very similar to the number of unemployed persons per job opening in the year leading up to the pandemic when nary a word was heard about a labor shortage. 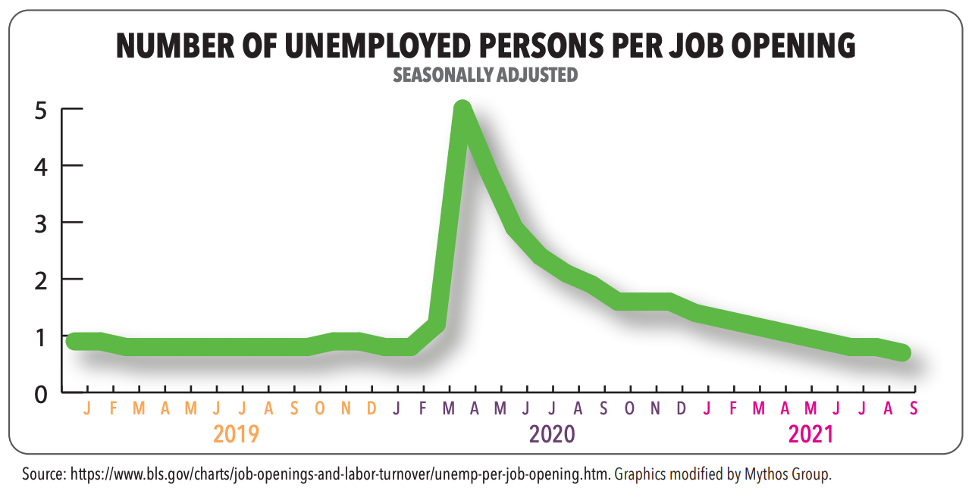 So, what’s really going on? What changed during the past 21 months that caused businesses across all industries to declare a crisis-level shortage of laborers? In a word – everything. The coronavirus pandemic has created a myriad of challenges for employers and employees alike. It’s imperative that business leaders identify the specific challenges that their organizations face so that they can implement tailored solutions that will allow them to attract talent in a post-pandemic labor force

One of the biggest problems we’re seeing is a mismatch between the jobs that people want and the jobs that are actually available. A recent Insider article details three types of mismatches that are currently at work. These mismatches are not only related, but they’re also working in tandem to keep positions in all industries unfilled.

The first is a skills mismatch. In August, economist Ellen Zentner wrote, “Differences in skills and qualifications limit the extent to which workers can easily transition to high-demand industries, leading to a mismatch of labor supply and demand.” Many job openings for highly skilled or highly specialized positions aren’t finding people with the skills needed to do the job. While abundant openings in low-wage, entry-level hospitality and food service industries are not likely to attract unemployed knowledge workers who quit their jobs in search of higher pay and job satisfaction.

This mismatch extends to geography as well. The pandemic caused a shift in the places people decided to live. Many workers left big cities in order to move to more affordable suburbs and the rural areas outside of dense suburbs known as exurbs. Cities with the highest costs of living are now in desperate need of service workers, workers who can’t afford to live near where they’re needed the most.

The third type of mismatch mentioned by Insider is the mismatch between employee expectations and employer realities. The pandemic fundamentally changed the way people see work. Faced with mortality, most workers decided that they didn’t want to spend the majority of their lives working for little pay in a job they didn’t like, especially if it put them at risk of contracting a deadly virus.

Enter The Great Resignation, a term coined by Anthony Klotz to describe the record number of employees that have left their jobs since March of 2020. Employees in all industries are no longer willing to settle for subpar working conditions and low job satisfaction. The global pandemic changed worker expectations. Jobs that don’t meet those expectations are simply not getting filled.

A lot has been blamed on the Baby Boomer generation in the past few years. However, when it comes to the labor shortage, a “Thanks, Boomer” might be in order. The workforce is aging, and the pandemic has led to a wave of early retirements. Buoyed by an accumulation of assets, many workers who were close to retirement decided that they would rather go ahead and retire than risk infection by going to work every day.

As these workers retire, there aren’t enough younger workers with the same skills to take aging workers’ places. Compounding this problem even more is the fact that people are having less children. According to the CDC, the number of births in the United States in 2020 was down 4% from 2019 to reach an all-time record low. That means this steady dwindling of the workforce is likely to continue as less Gen Xers replace Baby Boomers, less Millennials replace Gen Xers, and less Gen Zers replace Millennials.

This is not a uniquely American problem. Japan has faced an aging population for years, and as of 2020, holds the top spot globally with 29% of its total population above the age of 65. Following closely behind are the over 65 populations of Italy, Germany and France at 23%, 22% and 21% of those total populations respectively. The United States reported 16.9% of their total population was over 65 in 2020, which is significantly less, but still cause for concern.

So where do we go from here? As with so many of the current questions facing the economy, technology seems to provide many answers. The implementation of emerging technologies such as automation, AI, robotics, smart factories and digitalization have great potential to not only balance the supply and demand imbalances in the labor market, but also to improve productivity and efficiency along the way.

However, a word of caution is prudent here. With the implementation of new technologies, organizations must be observant to make sure problems are being solved rather than created. For example, a recent Wall Street Journal report found that more and more employers are using hiring software to sort through resumes and filter out unfit candidates. A Harvard Business School study found that 99% of Fortune 500 companies are using Oracle’s talent-sifting software, Taleo, alone.

Many job seekers are being tossed in the “no” pile by these types of software just because they don’t include specific key words in their resumes. Other highly qualified candidates are being overlooked because they don’t have a four-year college degree or possibly have a gap in their years of employment. This is a glaring example of the shortcomings of automation and one that’s having dire consequences for millions of jobseekers as well as employers.

The Society for Human Resource Management conducted a survey in the summer of 2020 and found that nearly 90% of 1,200 employers they surveyed said that they were having a hard time filling their open positions, and 73% said that they were seeing less people applying for hard-to-fill positions such as hourly, entry-level jobs in industries like manufacturing, hospitality, foodservice and healthcare.

One employer who is not having a problem staying fully staffed is Michael Lastoria, CEO of &pizza. He’s vocally challenged the notion of a labor shortage claiming that what’s actually happening is a shortage of employers willing to pay a decent living wage to their employees. In an interview with Insider, Lastoria, who pays his employees an average of $16 an hour plus benefits, said, “We are living proof that the claims that business owners are making about the impossibility of paying people enough money to live on are false.”

Recent statistics back up his views that corporate America has benefitted CEOs at the expense of the working class. An Economic Policy Institute report states that CEO pay has increased 1,322% since 1978. As of 2020, CEOs now make 351 times as much as a typical worker.11 Clearly, this is unsustainable. The inability to fill low-wage positions may be the first sign that a correction is on the way. After all, not having workers is an existential crisis for employers. As Michael Lastoria says of &pizza, “We built this company around taking care of workers because without them we wouldn’t exist.”

The War For Talent

Steven Hankin coined the term “War for Talent” in a 1997 McKinsey study. The term was further popularized in 2001 when the book, The War for Talent was released by McKinsey & Company consultants Ed Michaels, Helen Handfield-Jones and Beth Axelrod. The concept of companies fighting to attract the best employees is obviously not new, but Covid-19 has added a new and novel chapter to the ongoing story.

As we continue to see workers who are mismatched to the types and locations of jobs available, who are refusing to work for low wages, and who are avoiding jobs that risk exposure to illness, we will continue to see open positions languishing on the job market. And, as long as we see companies engaged in a battle for employees, we will see clear winners and losers in the escalating war for talent.

If your company is engaged in this battle right now, the talent management experts at Mythos Group can help. We can identify your business’s specific staffing challenges and recommend tailored action items that will not only fill empty positions, but that will also attract the talent necessary to increase your company’s productivity, efficiency and profitability. Our holistic human capital strategies integrate culture, diversity, organizational structures and leadership capability as well as talent.

Contact Mythos Group to tell us how the labor shortage is affecting your business. We look forward to hearing from you!